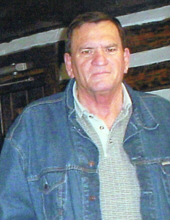 George Wickliffe, 80, of Tahlequah, Oklahoma, passed away on Tuesday, December 19, 2017 in Muskogee, Oklahoma. He was born on August 10, 1937 in Kenwood, Oklahoma. George faithfully served his Country in the United States Army. He married Maxine Griffin on May 28, 1957. George attended college at Northeastern State University obtaining his Master's Degree. He also attended TU Law School in Tulsa, Oklahoma. George was a very educated man and wanted that same education opportunity for everyone, teaching bilingual classes at Northeastern State University and Rogers State University. He retired as school administrator at White Oak Schools. George served as the Principal Chief of the United Keetowah Band of the Cherokees for many years. He was a kind and caring man who always thought of others. George dearly loved his family especially his 15 grandchildren and great grandchildren. He leaves a great legacy for his family and friends to follow and cherish.

Funeral Services will be held on Wednesday, December 27, 2017 at 2 p.m. in the Kenwood Gymnasium. Visitation will be held on Tuesday, December 26, 2017 from 6-8 p.m. in the Shipman Funeral Chapel. To leave a personal message to his family please see his Tribute at www.shipmansfuneralhome.com Arrangements are under the direction of Shipman's Funeral & Cremation Service.

George is survived by his wife, Maxine of the home; sons, Bill and wife, Debbie Wickliffe of Pryor, OK and Gomer Wickliffe of Tahlequah, OK; daughter, Portia Kelley of Claremore, OK; 15 grand and great grandchildren; many other relatives and friends. He is preceded in death by his parents, Ben and Rosa Wickliffe; one daughter, Angela Wickliffe.


Euwasha Cemetery
To order memorial trees or send flowers to the family in memory of George Wickliffe, please visit our flower store.