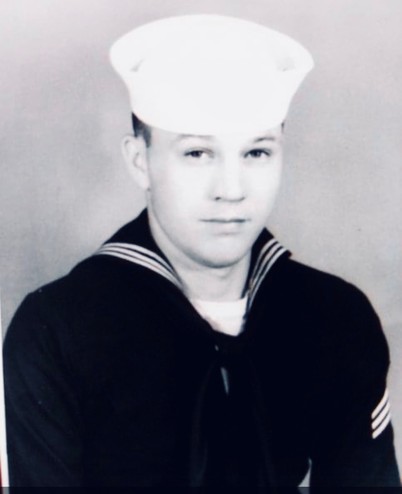 Andy Joe Rhodes was born November, 22, 1937 in Yonkers, OK, to James Walter (Jake) and Rowena (Davis) Rhodes.  He departed this life on January 21, 2021.  He grew up in the Four Corners area south of Locust Grove and was the oldest brother to nine brothers and sisters. He graduated from Locust Grove High School in 1956.  Upon graduation from high school, Andy enlisted in the United States Navy. He faithfully served his country as a Navy Corpsman in the United States Marine Corp 1st Division from May 1956 to June 1962.

Andy returned from the service to Tulsa, OK, where he met and married Reba (Naugle) Rhodes on March 23, 1962 in Tulsa, OK.  Together they raised three children, Lisa, David, and Lori.  In 1974 Andy moved his young family to Leach, OK, where he enjoyed going to church, hunting, fishing, farming, gardening and working in his shop.  In 1980 Andy and Reba purchased Jiffy Stop in Salina, which he and Reba operated for several years. Salina has remained his home for 41 years.  Andy worked in metal fabrication as a fitter and Quality Control Inspector until his retirement in 2002.  After his retirement, he cared for his wife Reba through the entirety of her illness until her passing in 2009.  In his leisure time, he loved going to church, watching his grandkids in their activities, westerns and the news on TV, reading his bible, playing solitaire and pitch and Old Maid with grandkids.  He looked forward to baseball season each year so he could watch the St. Louis Cardinals, who he followed since the days of listening to the games on the radio. Andy was a member of Leach 1st Baptist Church, Disabled American Veterans, DAV #23, Mayes County and a Salina Wildcat fan and supporter.

Andy loved giving everyone he met a nickname and picking on his grandkids to the point of purposely misspelling their names on Christmas cards, saying their names wrong, and telling them he was now an OSU fan because he gave up on the Sooners. He had a loud spunky personality with a quick comeback.  His grandkids all agree he made the best biscuits and gravy in the world and they would spend the night, just so he could make them breakfast.  He loved his family and he had no doubt how much he was loved.  He adored his great-grandkids and cherished each moment with them. He was pop, poppa, poppa Andy , pop-pop, and Grandpa Andy.

To order memorial trees or send flowers to the family in memory of Andy Rhodes, please visit our flower store.