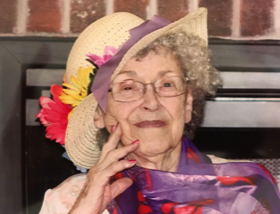 Ann Elizabeth Neeley was born on February 13, 1924, in Altus, Oklahoma, to Arthur Custer Killman and Erna Vivian (Hess) Killman and entered eternal life on March 11, 2021, in Catoosa, Oklahoma. Elizabeth attended schools in Oklahoma City, later moving to Texas and Nebraska before returning to Oklahoma City where the family remained for only a few years before moving to Great Britain.  Returning from Great Britain, the family first lived in Wisconsin before returning to Oklahoma City in 1957, and then to Tulsa in 1960.  In 1965 she and her husband Roger moved to Chouteau where they started a cattle ranch. Although she worked a few years as a nurse, and briefly as an office manager for a Tulsa automobile dealership, her true career was homemaker, wife, mother, grandmother, great grandmother and great-great grandmother. An accomplished seamstress, she loved sewing for her grandchildren, and knitted hats, scarves, sweaters, mittens and afghans for all.  She crocheted more items than anyone can remember, embroidered tablecloths, towels, anything she could embellish, and later turned to machine embroidery and quilting.  She loved her garden and produced an abundance of canned vegetables and some of the sweetest strawberries anyone ever tasted.  Her sewing, quilting, embroidery, and canned goods earned her numerous Blue Ribbons at the County Fair.  At age 91, she surprised her family when she learned to paint.  Her hands were never idle, not once in her 97 years. Elizabeth was active in Chouteau Garden Club for many years, serving as secretary and as President.  She was a member of Mazie First Baptist Church for many years, attending until she moved into assisted living in Catoosa in 2015.

Graveside services for Elizabeth will be held at 1:00 p.m., Thursday, March 18, 2021 at Chouteau West Cemetery with Brother Andy Herring officiating. Family visitation will be held from 6:00 p.m. to 8:00 p.m. on Wednesday, March 17, 2021 at Shipman’s Funeral Home in Pryor, Oklahoma. To leave her family a message, please visit her Tribute Wall at www.shipmansfuneralhome.com. Funeral arrangements are under the direction of Shipman’s Funeral & Cremation Service.

To order memorial trees or send flowers to the family in memory of Ann "Elizabeth" Neeley, please visit our flower store.