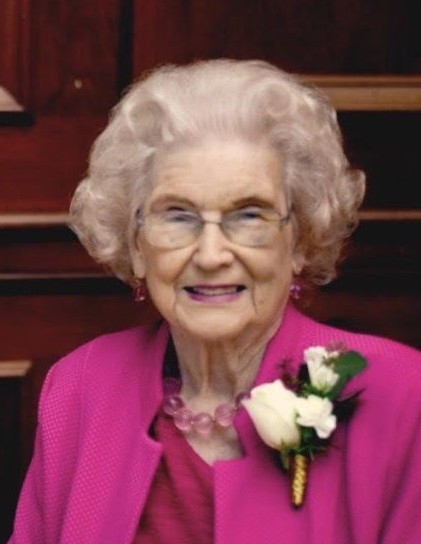 Betty Jane Bergman, 90, of Pryor, passed away on Monday, January 13, 2020 in Pryor. She was born at home, on the main street of Boatman on April 6, 1929; the daughter of Samuel Nathanial and Monnie Lee (McCasland) Bradford, where Betty still had the receipt from her birth where her father paid Dr. Sybil Adams $30.00 for her delivery. Betty had a great childhood with her brother, Dale. From swimming in Bryan Chapel Branch Creek, swinging from grape vines, roaming around in the woods, and having corn cob fights. She attended Salina School in the fifth grade and finished grade school at Bryan Chapel and graduated from Strang High School Class of 1946. Betty attended Northeastern A & M College at Miami for 2 years, then the second year ended, her father, had gotten her a job at Strang Elementary School. She started her teaching career at the age of 19. Betty met the love of her life, Henry Bergman. She wanted to get married, but also wanted a car. Henry had told her “I’ll buy you a car. Let’s get married.” They were married on October 5, 1951. Together they raised three children, Stanley, Kent and Lisa. They had celebrated 48 years together before his passing on April 10, 2000. After moving to Tulsa and back to Pryor to the farm, Betty finished the year teaching at Chouteau Public Schools and the next year started teaching at Jefferson. When Lincoln was built, she moved her fifth graders there. After 30 years in the classroom, she retired in 1990. She was diagnosed with breast cancer in 1978, and continued to teach through 25 radiation treatments and a year of chemotherapy.  After retirement, she became the treasurer of the Mayes County Retired Educators and also of the DAR (Daughters of the American Revolution). She belonged to two teacher conclaves, Delta Kappa Gamma and Kappa Kappa Iota. She joined the HCE for the fellowship and made some great new friends there. She was active in the Mayes County Historical Society and the Mayes County Genealogy Club, the Red Hat group, the Argonaut Club and many other clubs throughout her lifetime. She was a longtime member of the Pryor First Baptist Church. In her later years, she enjoyed going to the Sertoma Club and eating lunch and visiting with her friends. As written in an article written about her years ago, told by her dear friend, Thelma Notley, the words still ring true. “Betty Bergman can be described in one word: Reliable. No club assignment or task is ever deemed unworthy by her. From small jobs to those involving more time, Betty will get it done.” And always with the special Betty smile and quiet manner. She never seemed to look for the bad side of life, but always for the good. Betty had a great life. She would say that her happiness didn’t depend on great wealth, but for her many friends and great children, grandchildren, and great grandchildren.

Funeral services will be held at 2:00 p.m., Monday, January 20, 2020 in the First Baptist Church of Pryor with Dr. Michael A. Cox officiating. Burial will follow in the Bryan Chapel Cemetery in Boatman, Oklahoma with Nathan Bergman, Hayden Bergman, Matthew Bergman, Mark Campbell, Steve Arric, and Adam Scott serving as casket bearers. Honorary casket bearer will be Brad Dennis. Visitation will be held from 3:00 p.m. until 5:00 p.m., Sunday, January 19, 2020 at Shipman’s Funeral Home. To leave her family a message, please visit her Tribute Wall at www.shipmansfuneralhome.com. Arrangements are under the direction of Shipman’s Funeral & Cremation Service.

To order memorial trees or send flowers to the family in memory of Betty Bergman, please visit our flower store.