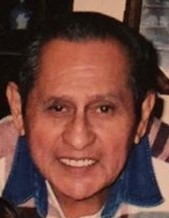 Bill Marcello Torres, 95, of Pryor, passed away on Wednesday, February 19, 2020 at his home. He was born on July 4, 1924 in Tulsa, Oklahoma; the son of Fidel and Felicita Torres. He joined the Navy in 1943 and was on the USS Hornet Aircraft carrier. He was a veteran of World War II. He loved his country and was very proud of his time served. He was married to Roberta (Honey) Stewart on January 3, 1946. They moved to Salina in 1972, where they raised their family. Bill retired from McDonald Douglas after 30 years of service. Bill was an industrial painter most of his life and loved telling the story of when he painted the Space Needle in Washington. He made many friends over the years drinking coffee and having breakfast at local cafes especially East Side Café, where he was pampered by all the staff and almost never had to pay for his meals. They took great care of him. Bill’s birthday was always a large family celebration that he looked forward to every year that was celebrated on July 4th. Bill was a very giving man and loved being able to donate to all kinds of charities. He also loved watching westerns and professional wrestling. Bill was also an avid reader, tending to his yard, and enjoyed painting all his lawn ornaments blue. He was a member of many organizations. He was a wonderful dad and grandfather (Little Papa) who loved his family dearly.

To order memorial trees or send flowers to the family in memory of Bill Torres, please visit our flower store.