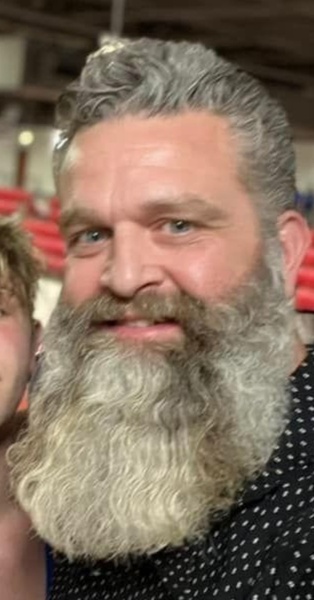 Chad Allen Felts, 46, of Pryor, went home to be with his Lord on Friday, July 22, 2022 in Pryor. He was born on July 14, 1976 in Tulsa, Oklahoma; the son of Clyde Dennis Felts and Marilyn (Gaffney) Felts. Chad married Rachelle Tuttle on May 16, 1998. During his high school years, Chad was very involved in sports. In 1995, he made football Allstate. He graduated from Pryor High School in the Class of 1995. In 1996, he made College All American Football, and played college football for NEO, and also received a scholarship to play football for Louisiana Tech. Also in 1996, he was saved and baptized on Easter at his grandmother’s church in Sperry. He worked as a car salesman most of his life at various dealerships, but his world revolved around his two children, Rya and Cayden. Chad enjoyed watching their sporting events, and being a part of coaching them and spending time with them every chance he could. He was a member of the Pryor Quarterback Club, Pryor Take Down Club, and coached 4th, 5th, and 6th grade Mayes County Youth Football. He was proud of taking his sons team to the championship in football during his 6th grade year. Chad had a heart for children, and was a mentor to many kids that he coached. When Chad wasn’t following sports, he also enjoyed the outdoors, going fishing, and watching hummingbirds. He loved to cook and would enjoy trying new recipes and cooking for an army. Chad was a man of faith and attended various churches in the area. He leaves us much to soon and will be missed by all who knew and loved him.

A Celebration of life will be held at 11:00 a.m., Saturday, July 30, 2022 in the Pryor Burdick Center. Honorary casket bearers will be Tank Felts, Mark Hayes, Bobby Belew, Brett Elza, James Peach, Jaylon Pierson, Zeke Bobb, Zaph Bobb, Zack Vanwinkle, and Leo Lovins. Visitation will be held from 6:00 p.m. until 8:00 p.m., Friday, July 29, 2022 at Shipman’s Funeral Home in Pryor. In lieu of flowers, the family asks that donations be made to the Mayes County Youth Football Association, the German Shepherd Rescue Foundation, or to any local mental health charity. To leave his family a message, please visit his Tribute Wall at www.shipmansfuneralhome.com. Arrangements are under the direction of Shipman’s Funeral & Cremation Service.

To order memorial trees or send flowers to the family in memory of Chad Allen Felts, please visit our flower store.