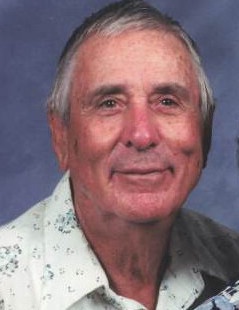 Charles Darwin Collins, 95, of Salina, passed away on Wednesday, April 27, 2022 in Claremore, Oklahoma. He was born on the family farm near Moody, Oklahoma; the son of Benjamin and Alma (James) Collins. He faithfully served his country in World War II, earning the Victory Medal, Asiatic Pacific Campaign Medal, and Philippine Liberation Campaign Medal. He married the love of his life, Valera Faye Carter, and she preceded him in death. He earned his Master’s Degree in Education and taught school throughout his life. He spent many years teaching across Oklahoma in Muldrow, Oktaha, Smith Chapel, Spavinaw and Salina. He also was the Elementary School Principal for 8 years in Salina. Darwin enjoyed coaching Salina High School baseball, basketball, softball, and volleyball. He was a member of the Salina First Baptist Church and looked forward to attending church events. Darwin loved fishing, especially at the Pumpback and when he was younger enjoyed noodling. He also loved a good Pepsi Cola and visiting with his friends and family. Darwin leaves behind many wonderful memories for his family to cherish.

Funeral services will be held at 2:00 p.m., Saturday, April 30, 2022 in the First Baptist Church in Salina with Reverend Jerold Pilant officiating. Burial will follow in the Ross Mayes Cemetery with Larry Barry, Trevor Barry, Clifton Collins, Michael Paul Staton, Clay Rice and Greg Rice. Visitation will be held from 6:00 p.m. until 8:00 p.m., Friday, April 29, 2022 at Shipman’s Funeral Home in Pryor. To leave his family a message, please visit his Tribute Wall at www.shipmansfuneralhome.com. Arrangements are under the direction of Shipman’s Funeral & Cremation Service.

To order memorial trees or send flowers to the family in memory of Charles Collins, please visit our flower store.