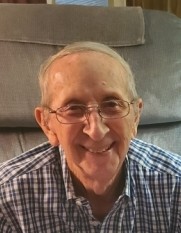 George Washington “Dub” Tipton, Sr., 89, of Pryor, passed away on Friday, November 22, 2019 in Tulsa. He was born on August 4, 1930 in an old 2 story tenant house 4 ½ miles south of Afton, Oklahoma on Highway 66; the son of Virgil E. and Lida Tipton. In May 1952, he graduated from Oklahoma A& M (which is now OSU) with his bachelor’s degree in Agriculture. George faithfully served his country in the United States Army from July 24, 1952 until July 8, 1954. He served 20 months in Korea and was battalion mail clerk with Headquarters and Services Company, 73rd Engineer Combat Battalion. After being honorably discharged from the Army, George returned home and married the love of his life, Barbara Ann Campbell. They were married at Castle Park Baptist Church in Miami, Oklahoma on Thursday, January 27, 1955.  He was working in the Farmers Home Administration Office in Muskogee. They took a 3-day trip to Southeast Oklahoma for their Honeymoon. They spent their first night at a motel near Thomas Café in Pryor. George and Barbara were married 57 years, until her passing.  George spent most of his life working for the United States Department of Agriculture, Farmers Home Administration and retired on August 1, 1992 after a 38-year career. After his retirement from USDA, George worked for Community Resource Group. He was instrumental in providing loans and grants for numerous rural water districts to get water to thousands of Oklahoma families. After retirement, he became involved in NARFE (National Association of Retired Federal Employees) and served as secretary/ treasurer for many years. He was honored by Cherokee Nation as a Cherokee Nation Patriot. In his later years, “Poppy” enjoyed spending time with his grandchildren and great grandchildren, cherishing each moment he had to spend with them. He also enjoyed gardening and attending services at First Baptist Church in Pryor, where he was a long-time member. George was a wonderful son, brother, husband, father, grandfather, and great grandfather who leaves behind a great legacy for them to follow.

Memorial services will be held at 10:00 a.m., Tuesday, November 26, 2019 in the First Baptist Church in Pryor with Doctor Mike Cox officiating. Glenn Lewis will be reading the Eulogy. To leave his family a message, please visit his Tribute Wall at www.shipmansfuneralhome.com. Cremation arrangements are under the direction of Shipman’s Funeral & Cremation Service.

To order memorial trees or send flowers to the family in memory of George Tipton, Sr., please visit our flower store.