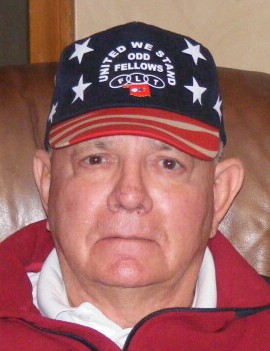 James L. (Sonny) Holler was born to Kenneth and Vergie Smith Holler on June 19, 1938. He departed this life on February 21, 2021. Sonny attended Pryor Public Schools, graduating in 1957. In 1959, he joined the US Army serving until 1963 which included a tour of duty in Korea. Upon his return, he met and married Theresa Dryden. Of that union, two children were born, Sherri in 1964 and Cindy in 1967. Sonny and Theresa made their home in Pryor where he retired from Georgia Pacific in 2003. Sonny was a member of the IOOF, International Order of Oddfellows of Pryor Creek and served in several leadership positions including the Grand Master of Oklahoma. During that time, he was honored to be able to travel to Washington DC to place a wreath on the Tomb of the Unknown Solider. He was particularly dedicated to the Oddfellow program “Shoes for Kids.” This program provided thousands of shoes to thousands of kids over the years, and worked very hard to make the program successful. He volunteered with the Green Country Girls’ Softball Association and was a dedicated and beloved coach to generations of Pryor athletes, including his granddaughter, Samantha. Today many former players still speak with respect and admiration of Sonny and his dedication to the sport. Sonny was awarded a certificate of recognition by the City of Pryor Creek for his 24 years of service to GCGSA. In addition to softball, Sonny spent many hours on the road taking his grandson Aaron James to many wrestling events.

​James is preceded in death by his parents, Kenneth and Vergie, his sister Shirley Mote, and son-in-law Wendell Snyder.  He is survived by wife Theresa of the home, his daughters Cindy Holler of Pryor and Sherri Vermeer and husband Scott of Pryor, grandchildren Aaron (AJ) Snyder of Pryor and Samantha and husband Nathan Hammons of Pryor, and by great grandchildren Waylon Buller and a great granddaughter of Pryor. He is also survived by his brother Walter Holler and wife Lily, sister Colleen Hopkins, sister JoAnn Epperson, and many nephews and nieces.

To order memorial trees or send flowers to the family in memory of James Holler, please visit our flower store.