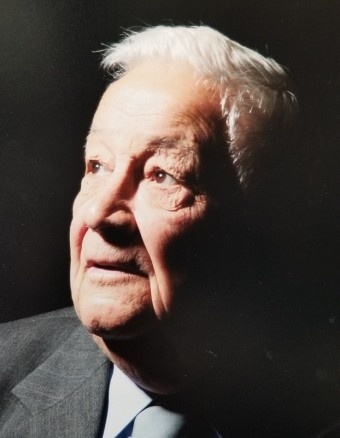 Jerry Floyd, 89, of Chouteau, passed away on Sunday, December 29, 2019 in Tulsa. He was born on June 22, 1930 in Quinton, Oklahoma; the son of Walter and Bessie (Garis) Floyd. Jerry faithfully served his country in the United States Airforce and was assigned within the 810th Operations Squadron. After being honorably discharged, he met the love of his life, Loretta Ford. They got married in Peoria, Illinois on August 10, 1965 and have celebrated 54 years of marriage. Jerry worked most of his life in the construction industry in management. His company was responsible for the building of the GRDA Plant and the Power Plant near Fort Gibson, as well as many others. He was the site supervisor of many jobs and would travel the country as they were being built. After retirement, he became the Mayor of the Town of Chouteau and served for 16 years. In his spare time, he enjoyed hunting, fishing, tending to his yard. Jerry also loved spending time with his children and grandchildren and looked forward to attending all the activities they were involved in. He was a wonderful husband, loving father, and caring grandfather and will be missed by all who knew and loved him. Funeral services will be held at 11:00 a.m, Thursday, January 2, 2020 in the Word Fellowship Church in Chouteau with Pastor Mark Johnson officiating. Burial will follow in the Chouteau West Cemetery with Jose Cantu, Kirk Kvittum, Keith Harris, Tommy Floyd, Gary Shrum, Aaron Dry serving as casket bearers. Visitation will be held from 6:00 p.m. until 8:00 p.m., Wednesday, January 1, 2020 at Shipman’s Funeral Home. In lieu of flowers, the family asks that donations be made to the Chouteau Fire Department or to the Chouteau Pound Pals.  To leave his family a message, please visit his Tribute Wall at www.shipmansfuneralhome.com. Arrangements are under the direction of Shipman’s Funeral & Cremation Service. Jerry is survived by his wife, Loretta Floyd of the home; sons, Terry Curtis and wife Ruth of Walnut Hill, Illinois and Jerry Floyd, Jr. and wife Theresa of Chelsea, Oklahoma; daughters, Julie Drumm and husband Brett of Chouteau, Oklahoma and Tracy Martin of Edmond, Oklahoma; 10 grandchildren and 3 great grandchildren; and many other relatives and friends. He is preceded in death by his parents, Walter and Bessie Floyd; son, William Curtis; and brothers, Jimmy and Ralph Floyd.

To order memorial trees or send flowers to the family in memory of Jerry Floyd, please visit our flower store.