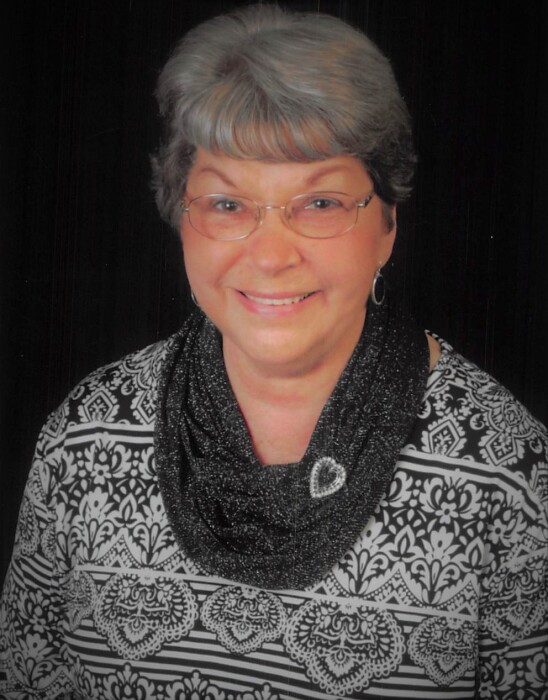 Joan Lee Backward, was born April 25, 1943, to Orville and Rosalee (Crosby) Clark in Salina, Oklahoma.  She went home to be with her Savior on November 7, 2021.  She graduated high school in Southwest City, Missouri.  After hearing him sing and a short courtship, Joan married Robert Backward, who she affectionately called, “Indian”, on March 30, 1962.  They began a wonderful life together, raising two sons, Wayne and Carey, and were married for 59 ½ years.  Joan was a very skilled seamstress and often sewed Robert’s suits.  Not only did she sew for her own family, but also she would sew suits for the quartets with whom Robert sang, and could construct and sew covers for just about anything (without using a pattern). Sewing wasn’t her only hobby.  She would also crochet in the stands as fast as the Wildcats could play, and her famous peach cobbler was the best—if you don’t believe it, just ask her grandkids.  Joan worked several jobs during her life.  She worked making luggage at the Claremore Luggage Company, as elementary school secretary at Salina Public Schools, as sales clerk at the Otasco store and two different dress shops in Salina, and finally spent 28 years as the secretary for Salina First Baptist Church.  Joan was a good listener and a true prayer warrior, and could remember nearly every church member’s phone number without even looking.  And, although she was good at many things, backing a trailer and catching a mouse were not on that list.  Joan and Robert made a great team, always supporting their community and their church.  When the boys were little, Joan kept the scorebooks while Robert coached little league baseball.  Later, while Robert led the youth group at church, she was there helping too.  Finally, later in life, the team went on the road, traveling around being the biggest fans of their grandkids’ activities. Joan was a loving wife, mother, grandmother, sister, and friend, and leaves behind many happy memories for her family and friends to cherish.

Joan is survived by her husband, Robert of the home; son Wayne and wife Patricia Backward of Salina; son Carey Backward of Salina; grandchildren Chad Backward, Courtney and Aaron Terrill, Cale Backward, and Coby Backward; and many other relatives and friends. She is preceded in death by her parents, Orville and Rosalee Clark, and brothers Johnny Clark, Jimmy Clark, Gary Clark, and Dee Clark.

To order memorial trees or send flowers to the family in memory of Joan Backward, please visit our flower store.