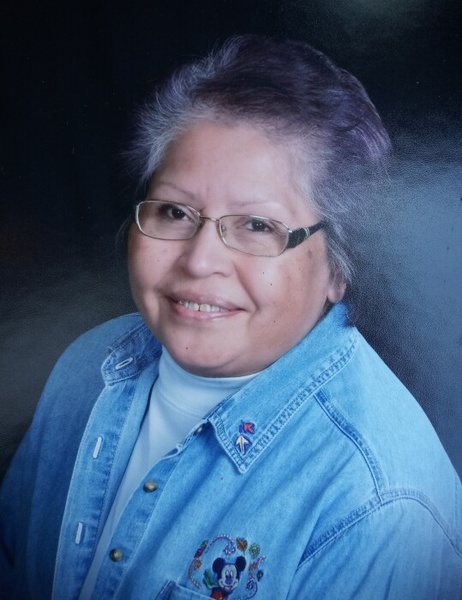 Elsie LaDonna Jones, born April 3, 1957 in Clinton, Oklahoma to Billy Saumty and Janie Nofire Jones. LaDonna left this life on Monday, September 21, 2020. She is preceded in death by her grandparents, Roy and Lillian Saumty of Gotebo, Oklahoma, Otter and Elsie NoFire of Welling, Oklahoma, and parents, Billy and Janie Jones of Anadarko, Oklahoma. She leaves behind 2 brothers, Billy W. and Sheri Jones of Midwest City, Oklahoma, James R. and Debbie Jones of Yukon, Oklahoma; one sister, Marsha Jones of Del City, Oklahoma; 6 nieces, Melissa and Will Stump of Midwest City, Oklahoma, Allison and Nate Terrill of Arkansas, Rachael and Dillon Sain of Shawnee, Oklahoma, Kelsey Jones of Yukon, Oklahoma, Kodi Jones of Oklahoma City, Oklahoma, Sarah Whetstine of Delaware, one nephew, Kayden R. Jones of Iowa. Her grandpa Roy taught her how to memorize the books of the Bible. At the age of 2, she recited those books of the Bible at Saddle Mountain. LaDonna attended Shawnee Public Schools, she was in Pep Club, and cheered on the Shawnee Wolves. After a move to Del City, Oklahoma, she became a Del City Eagle. She graduated from Del City High School in 1975. She was trained professionally on the piano by Miss Myrtle Merrill of Oklahoma Baptist University where she used the training to play in Church. LaDonna never had children of her own and doted on her nieces and nephew with gifts, cards, texts, advice, and encouragement. They were, in her eyes, her kids too. She was proud of each of them. She loved cats, Zeb, and Sophie precedes her as well as Rocky, her dog. LaDonna never questioned her salvation. She met the Lord at a very young age and baptized at the Trinity Baptist Church, Shawnee, Oklahoma, by Brother James Green. She was an Acteen and received the level of Queen with Septor in Missions.  She loved to read and could read a book in an hour. She liked to listen to George Strait, Santana, Chicago and Boz Skaggs. She received her bachelor’s degree in Business Management from the University of Phoenix in 2000, utilizing the degree in Oklahoma, Arizona, and Florida. LaDonna will be greatly missed by her family and friends yet the hope we have is in the love Jesus showed on the Cross.

To order memorial trees or send flowers to the family in memory of LaDonna Jones, please visit our flower store.