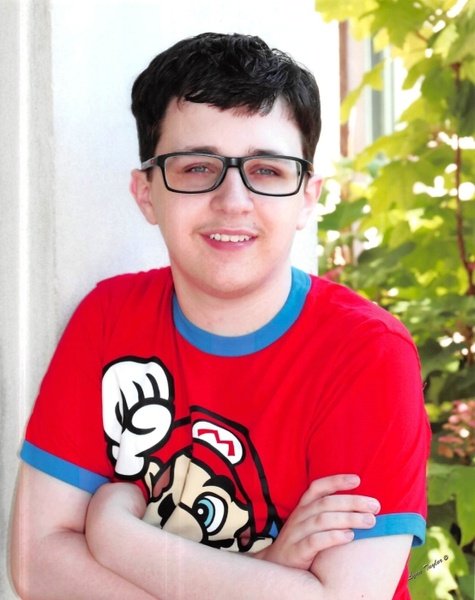 Luke James Graves was born on March 14, 2004 in Tulsa, Oklahoma to Steve and Angie Graves; he passed away at his home in Broken Arrow, Oklahoma on January 26, 2022 after a long battle with cancer, NF1 Disease and Autism.  Luke started his life living in Pryor, Oklahoma attending Lincoln Elementary School through third grade.   He also attended the Pryor Church of Christ.  Upon moving to Tulsa in 2013 he attended Town and Country School continuing through 12th grade.   In spite of his health issues Luke excelled Academically.  With his unique personality he was able to cultivate student relationships and the admiration of his teachers.   Luke's broad interest in video games led him to a near obsession with Super Mario Brothers having a vast interest in anything MARIO, his collection would rival a small museum.  At this point Luke became MARIO!!  Luke's autism demanded an eating routine consisting of Mexican food, McDonald's Cheeseburgers and sausage pizza.  Every Monday Luke required a visit to TED's where he was known as "MARIO"!  Many times, his meal would get to the table before he did!

Luke is survived by his mother, Angie Graves of the home, his Father Steve Graves and Stepmom, Karen of Vinita.  Sister Lauren Head and husband Logan of Pryor and daughter, Rylie Head.  Brother Robert Graves and wife Tyne of Adair.  Step brother Tim Wood and wife, Saundra of Eucha.  Grandparents, Gary and Arlene Risner of Broken Arrow and James Graves of Adair.   Also, a host of aunts, uncles, nieces, nephews and cousins.  He was preceded in death by his grandmother, Joan Graves of Adair.

Funeral Services for Luke will be held at 10:00 a.m., Saturday, January 29, 2022 in the Church of Christ in Pryor with Brother DJ Castoe officiating. Burial will follow in the Spavinaw Strang Cemetery. Visitation will be held from 6:00 p.m. until 8:00 p.m., Friday, January 28, 2022 at Shipman’s Funeral Home. In lieu of flowers, the family asks that donations be made to the Town and Country School in Tulsa at tandcschool.org or to the OK Kids Korral at tobykeithfoundation.org/ok-kids-korral. To leave his family a message, please visit his Tribute Wall at www.shipmansfuneralhome.com. Arrangements are under the direction of Shipman’s Funeral & Cremation Service.

To order memorial trees or send flowers to the family in memory of Luke Graves, please visit our flower store.