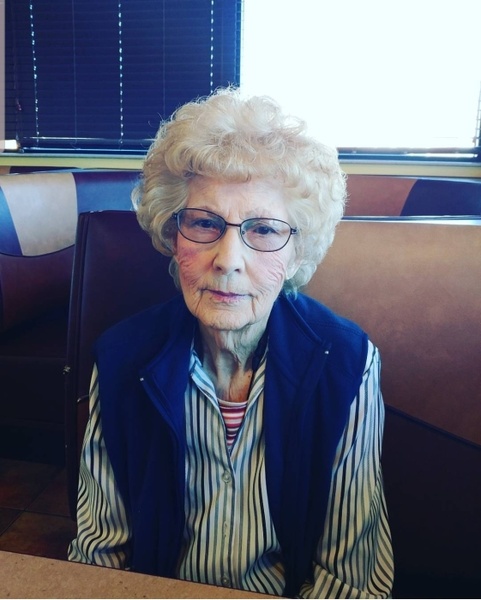 Mabel “Lou” (Alexander) Marlin, was born October 29, 1929 at home without running water, electricity or indoor plumbing in what is now the game refuge near Kenwood, Oklahoma. Her parents were Irvin A. Alexander and Vian Jane (Gates) Alexander. She was #10 out of 16 children. She married John L. Marlin, Jr. on April 12, 1952 in Starkville, Mississippi and they made their home in Salina, Oklahoma in 1954 where she resided until her passing on October 15, 2019. She loved cooking, sewing, canning, collecting recipes, gardening, flowers, spending time with her family, dancing, listening to music, going on Sunday drives, spending her “mad money” on pretty things, antiquing, going bargain shopping, playing pitch and wahoo, big family dinners, taking care of her animals even if she swore she didn’t like them, and all around general homemaking. Her cooking and especially her homemade chicken and noodles were LEGENDARY, and her baking skills were second to none. After her children got out of elementary school, she worked at the Salina Parkhill nursing home and volunteered at the Pryor hospital. Later in life she began crocheting afghans and they were beautiful and numerous. In 1973, John and Lou began a 31-year family camping tradition along with her sister, Edith and husband Hank Vanover on Spavinaw creek at what is now Spring Valley Ranch. Boat trips, noodling catfish, fishing, swimming, floating the creek, cooking out under the trees, and camping antics made for so many humorous stories and wonderful memories for her, John, her siblings, the kids, grandkids, nieces, nephews, cousins, and friends. She was a member of the Salina American Legion Cleo Farr post auxiliary, Salina VFW post 5307 auxiliary, Salina Homemakers Club for which she won several blue ribbons, and Salina First Baptist Church. She volunteered at the Salina Community Center and was a member of the Salina Chamber of Commerce. When the Lions / Lioness club was active in that as well as volunteered at Teen Town in the 60s. She always enjoyed going to the Salina Chouteau Day celebration and was named the 2019 Salina Chouteau Day Pioneer recently. Lou is survived by her children, Steve Peck of Wickliffe, and a daughter Linda Marlin and husband Gary Linton of Salina, her grandchildren, Shanna Marlin of Tulsa, Jamie and husband Chris White of Salina, Kevin Brown and wife Kristy of Salina, great grandchildren, Rainey & Nolan White of Salina, & Kyleigh Brown of Claremore, brother Bob Alexander of Copan, Okla., foster siblings Barry & Jerry Hess, as well as several nieces, nephews, friends, and special family friend Becky Laipple of Bixby, Okla. Also, her puppies Buttercup, Sophie Bell, and Daisy Mae and cat Dolly. She is preceded in death by her husband, John L. Marlin, Jr., her parents, Irvin and Janie Alexander, siblings, Elmer, Orace, Mary Newton, Virgil, Tuffy, Delores, Irvin, Jr., Edith Vanover, Wayne, Pauline, Warren, William, James Clarence, Leon, and daughter in law, Rhonda Peck. She will be laid to rest in Spavinaw – Strang Cemetery with her husband, John and the rest of her family and loved ones.

To order memorial trees or send flowers to the family in memory of Mabel Marlin, please visit our flower store.