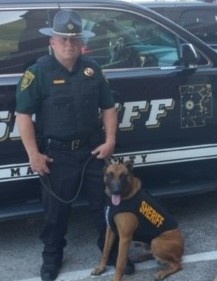 Titan (Dual Belgian Malinois), E.O.W. February 29, 2020, was under the direction of Deputy Ray Thomas. The Mayes County Sheriff’s Office utilized K-9 Deputy Titan for various high-risk situations such as tracking of suspects, article search and rescue searches, as well as drug interdiction.  He was also trained to protect Deputy Thomas and to hold a violent or dangerous person from escaping. Titan was on call 24 hours a day to protect and serve.  Titan had 82 deployments with 73 % accuracy. He logged 1023 hours of training, had many apprehensions, 8 voluntary surrenders and 10 article finds during the past two years at the Mayes County Sheriff’s Office.   Although patrol work, narcotics detection, and maintenance training consumed a major portion of Titan’s time, he also frequently performed many other assignments. Titan was often called upon by other agencies to assist with law enforcement related duties.

To order memorial trees or send flowers to the family in memory of Mayes County K9 Officer "Titan", please visit our flower store.