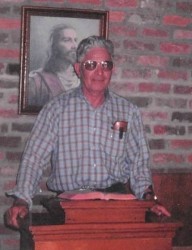 Reverend Clifford Loftis, Sr., 87, went home to be with the Lord on September 13, 2021. He was born in Delaware County, Oklahoma on March 26, 1934 to Viola Watermelon and raised in Jay by his mother and Lee Watermelon. As an adult, Clifford was a carpenter, a mechanic, and a worker for the State Highway Department for 15 years. He also helped build and worked as a handyman at Wickliffe Schools. He was a kind, cheerful man who loved to tell jokes and pull pranks. Clifford married Nellie Boney in 1956 and had 4 children. He became a church deacon in 1963 and would go on to become a licensed minister ten years later. In 1985, he became an ordained minister while pastoring at Snake Creek Baptist Church. Throughout his life as a pastor, he spread God’s word at Snake Creek, Elm Prairie, and Pine Ridge Baptist churches. His favorite times were spent at Fellowship where he inspired and influenced many. Clifford was known by many names in his life; son, brother, father, dudu (grandpa), friend, but above all, he was a man of God. He dedicated his earthly life to serving God and pastoring to others.

To order memorial trees or send flowers to the family in memory of Reverend Clifford Loftis, Sr., please visit our flower store.