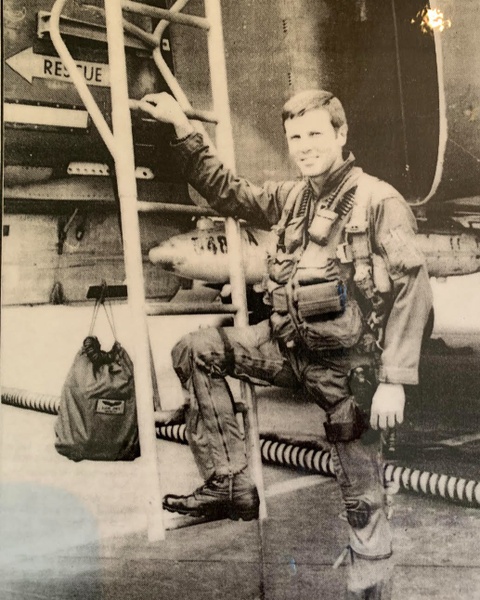 Robert Blaine Jones, 85, went to be with the Lord on September 23, 2022. Blaine was born to Paul and Pauline Jones on January 19, 1937, in Clinton, Oklahoma and moved to Pryor as a small child. Growing up in Pryor, Blaine played sports in high school, hung out with friends, and enjoyed snow skiing. After graduating high school in 1955, he enlisted in the United States Air Force.  Among the myriad of command positions, Blaine was a F-4 fighter pilot and served overseas in Vietnam, Thailand, England, and Korea. Blaine was awarded with the Purple Heart, Legion of Merit, Distinguished Flying Cross with V device and two oak leaf clusters along with many other awards and decorations. He left active duty as a colonel.  Blaine, during three combat tours in Vietnam later became responsible for U.S. Air Force tactical aircraft and equipment acquisition. Then, as director of maintenance, was responsible for 81 years aircraft deployed worldwide, and supervised more than 1,500 employees. He enjoyed his work flying as a fighter pilot, restoring old vehicles, helping veterans, creating fishponds, and playing with his grandchildren with his beloved wife, Margaret. After his retirement from the Air Force, Blaine went on to earn several degrees including a B.S. from the University of Tulsa, an MBA from Georgia State University, and his J.D. from Oklahoma City University. He practiced as a lawyer and judge in Pryor, Oklahoma and was admitted to practice before the Supreme Court, United States District Courts and the Supreme Court of the State of Oklahoma. Blaine was very active in Veterans organizations, civic organizations, and religious affiliations.

Graveside services will be held at 10:00 a.m., Saturday, October 1, 2022 in the Fairview Cemetery in Pryor with full military honors. Visitation will be held from 6:00 p.m. until 8:00 p.m., Friday, September 30, 2022 at Shipman’s Funeral Home in Pryor.  To leave his family a message, please visit his Tribute Wall at www.shipmansfuneralhome.com.

To order memorial trees or send flowers to the family in memory of Robert Blaine Jones, please visit our flower store.