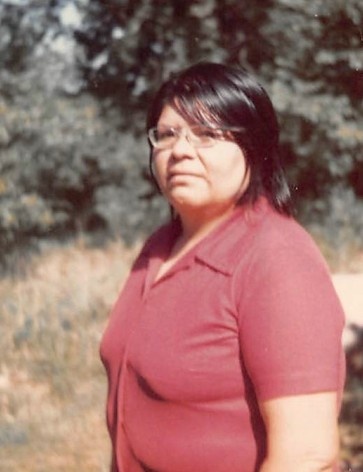 Shirley Ann Budder, 74, of Salina, passed away Sunday, December 23, 2018 in Tahlequah. She was born on August 29, 1944 in Salina, Oklahoma; the daughter of Adam and Katie (Kingfisher) Ross. She worked as a homemaker most of her life. She married Louie Budder on April 20, 1981 in Kenwood, Oklahoma.  Shirley enjoyed making quilts, beadwork, making traditional Indian baskets and clothing. She also enjoyed making kanuchi, cooking, and making big meals any chance she got. Shirley loved car shows and for many years held the 4th of July Car Show. She had a giving heart and was kind to everyone she met, Shirley would help as much as she could to anyone in need. She enjoyed being with her family and looked forward to spending each moment she had with them. She was a wonderful wife, mother and grandmother who leaves behind many memories for her family to cherish.

Shirley is survived by her husband, Louie Budder of the home; son, Steven Morales and wife Starr of Dermott, Arkansas; daughters, Kendall Budder and Jamison Hair of Kenwood, Oklahoma and Lora Budder of the home; 6 grandchildren, Kaeden, Jeriah, and Trinity Budder, Raynee Nofire, and William and Eleina Morales; 1 great grandchild, Echota Budder; many nieces, nephews and many more relatives and friends. She is preceded by her parents, Adam and Katie Ross; and brothers and sisters.

To order memorial trees or send flowers to the family in memory of Shirley Budder, please visit our flower store.