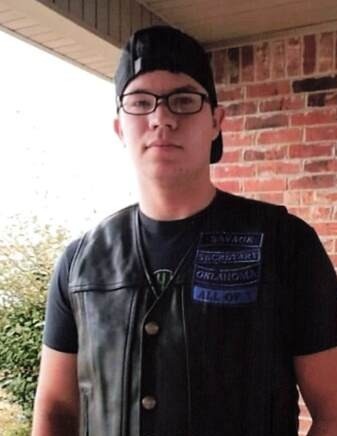 Stephen Drake Summerfield, 25, died unexpectedly on October 31, 2020 in Pryor,
Oklahoma. Stephen was born in Tucson, Arizona on December 8, 1994 to Larry Summerfield and
Valerie (Hale) Summerfield. After high school, he attended the A. L. E. R. T. Academy in
Texas and moved to Oklahoma in 2014. Stephen attended Rogers State University
where he completed his degree in Criminal Justice and CLEET in 2018. Stephen was
proud to serve as a Law Enforcement Officer for the community of Jay, Oklahoma
Stephen leaves behind his wife, Erica and a son, Drake Michael of Pryor, Oklahoma.
His parents, Larry and Jennifer Summerfield of Tucson, Arizona; his brother James
Summerfield who is active duty Army; his sisters, Faith and Aria Summerfield of
Tucson, Arizona; his honorary brother Cody Spiller of Jay, Oklahoma; grandparents,
Benny and Judy Summerfield of Pryor, Oklahoma and Sharon James of Burnsville,
North Carolina; as well as numerous aunts, uncles, cousins and friends. He is preceded
in death by Grandfather, Tommy James; Great Grandparents Drake and Claudine
Summerfield, and Great Grandfather James Riley Mullin.


Stephen had a love for is family, his country, and being part of the Seventh Sin
Motorcycle Club. One of the highlights of his life was the birth of his son, Drake. He
was so proud that he could continue the legacy of the Summerfield name. This little
man brought Stephen so much joy. His love of country and sense of duty directed him
to join the US Army in 2015. Although injury did not allow him complete his
commitment, he continued to pursue a career that would allow him to serve the
community.

Stephen loved being a part of being apart of something bigger than himself
and the freedom of the open road. He loved riding his motorcycle with his brothers in
the SSMC, and participating in the charity events that allowed him to make a difference
in the lives of others. He leaves behind a legacy of honor, courage, and kindness that
will never be forgotten.

To order memorial trees or send flowers to the family in memory of Stephen Summerfield, please visit our flower store.