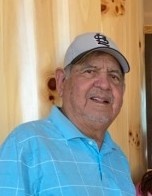 William Gene Kingfisher, aged 70, went to be with his Lord Jesus on the 11th of January, 2022. William was born in 1951 on the 16th of June, to Claude Kingfisher and Betty (Pickup) Kingfisher, and was raised in his hometown of Salina, OK. William was a Cherokee First Language Speaker, and did not learn English as a second language until he began to attend public school. William graduated from Salina High School in 1969. In 1971, William met his wife Mary Cooper, while attending Oklahoma State University Institute of Technology in Okmulgee, Ok. William and Mary grew their family when they welcomed their first child, Geneva in 1972, second child Jim, in 1974, and youngest child Jana in 1975. In their fifty years together, William and Mary have seen their family grow with eight grandchildren, and three great grandchildren. William was among many things, a builder. He had over 45 years of experience in roofing, and was the co-founder of Kingfisher Roofing, which he founded with his brother Clarence Kingfisher. His work as a roofer took him all over the country, allowing him a lifetime of seeing new places, and meeting new people. Whether it was an Arizona sunset, standing by the waters of the Pacific in Hawaii, or drinking coffee by a riverside in South Dakota, William took great comfort and joy in the beauty of God’s creation. Outside of his professional role as a builder, William was first and foremost a builder for the Lord. He was a member of the Coo-Y-Yah Baptist Church from its founding, and served many roles during his time there, but among those his favorite was working with the church youth. He taught children’s church on Sundays, in addition to raising money and sponsoring countless trips for the youth to Indian Falls Creek. In addition to his own children and grandchildren, William claimed those youth as his “weekend children,” and loved helping them come to know and love Jesus. William in his life as a builder, was always building and improving himself as a person. That drive led him to learn and pick up new hobbies and interests. Among those hobbies he was a self-taught painter, often depicting landscapes, wildlife, and beautiful tribal feathers. He also enjoyed golfing, baseball, softball, volleyball, and horseshoes, with well over fifty first place horseshoe tournament wins. He also enjoyed cheering on the Oklahoma State Cowboys, Kansas City Chiefs, and St. Louis Cardinals any chance he could. He often enjoyed coaching youth in these sports as well. William leaves behind a legacy of love, leadership, and service to his Lord. He wrote about his belief in God’s promise, that this separation is only temporary, and that all those he leaves behind will be reunited with him one day.

Graveside services will be held at 2:00 p.m., Tuesday, January 18, 2022 in the Grass Cemetery in Salina, Oklahoma. Visitation will be held from 6:00 p.m. until 8:00 p.m., Monday, January 17, 2022 in the Shipman’s Funeral Home Chapel. To leave his family a message, please visit his Tribute Wall at www.shipmansfuneralhome.com. Arrangements are under the direction of Shipman’s Funeral & Cremation Service.

To order memorial trees or send flowers to the family in memory of William Kingfisher, please visit our flower store.