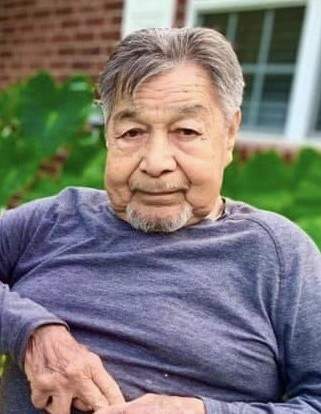 William Stanley Smoke, 76, of Peggs, left this earth on Thursday, July 15, 2021 in Tulsa. He was born on January 7, 1945 in Claremore, Oklahoma; the son of Sam and Goldie (Dreadfulwater) Smoke. William faithfully served his country in the United States Army during the Vietnam War and was a fluent Cherokee Speaker. He owned and operated the Spavinaw Tag Agency for 20 years, has had two mobile home parks, and served on the Cherokee Nation Tribal Council from 1991 to 1995, and then from 1995 – 1999 for District 6 (Mayes County). William had many hobbies, he loved bass fishing and entering bass tournaments, hunting, working in his flower and small vegetable gardens, and attending his grandchildren's activities/events. He was proud of his military service and served as commander of the American Legion in Spavinaw and was also the current Vice Commander of the Tahlequah VFW Post 3707. He was active within the Cherokee Nation, was a member of the Stokes Stomp Grounds and was proud of his Cherokee culture. He married Deborah Robertson on July 26, 1981 and they have spent nearly 40 years together. In his spare time, he looked forward to watching old western movies, boxing, and playing bingo. He loved to laugh and spending time with his family and grandchildren. William leaves behind many wonderful memories for his family to cherish.

Funeral services will be held at 11:00 a.m., Wednesday, July 21, 2021 in the Peggs School Gymnasium with Don Greenfeather officiating. Burial will follow in the Jack Ribbon Cemetery in Spavinaw with Jamison Hair, Kyler Hair, Bryce Mayfield, Gabriel Smoke, Sam Smoke, and Steve Smoke, serving as casket bearers, with Kevin Hair, John Jones, Johnny Murphy, and Chris Smoke as honorary casket bearers. Visitation will be held from 6:00 p.m. until 8:00 p.m., Tuesday, July 20, 2021 in the Shipman’s Funeral Home Chapel in Pryor. To leave his family a message, please visit his Tribute Wall at www.shipmansfuneralhome.com. Arrangements are under the direction of Shipman’s Funeral & Cremation Service.

William is survived by his wife, Deborah Smoke of the home; daughter, Audra Smoke – Conner and husband DJ of Peggs, Oklahoma; 3 grandchildren, Trey, Lynsey, and Macey Conner; brothers, Andrew Smoke and wife Brenda of Vinita, Oklahoma, Johnny Smoke of Jay, Oklahoma, Billy Smoke and wife Judy of Locust Grove, Oklahoma, and Smokey (Ron) Smoke and wife Brinda of Tulalip, Washington; sister, Virginia Young of Spavinaw, Oklahoma; mother-in-law Jackie Robertson of Sapulpa; brother-in-law David Robertson and wife Marty of Tulsa, special family friends, Michael Murphy and wife Jami of Tahlequah, and their children, Caden and Austin Murphy (who he considered his grandchildren); and a host of nephews, nieces, many other relatives and friends. He is preceded in death by his parents, Sam and Goldie Smoke; 2 brothers, Sanford and Joe Smoke; 2 sisters, Vivian Hair and Pauline Meashintubby; and ex – wife, Terri Stoner.

To order memorial trees or send flowers to the family in memory of William Smoke, please visit our flower store.