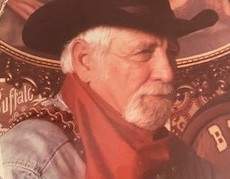 William Joseph Thompson, 76, was born on October 23, 1944 to French and Mary Alice Thompson in Enid, Oklahoma. He attended and graduated from Pond Creek High School in 1965. Joe was drafted to the United States Army, serving 2 years in Vietnam. Joe was very proud to have served his country. After his tour in Vietnam, Joe went to work as a Pipe liner. He worked and traveled all over the United States as a superintendent and running heavy equipment. He was well loved by his crew earning the nickname “Papa Joe.” He retired from the pipeline after 60 years. He met and then married Nanetta Phelan on September 18, 2004, in Miami, Oklahoma. Joe loved being outside and hanging out at the creek. He enjoyed all of his grandkids and had nicknames for all of them. He was Papa Joe to all the nephews and nieces, too. Joe’s favorite thing was to hide in the woods with a scary mask on and chase the kids down the driveway to hear them scream. He was also a huge “big foot” fan. He leaves behind many memories for his family and friends to remember.

Funeral services will be held at 2:00 p.m., Monday, October 4, 2021 in the Blue Springs Church in Salina with Reverend Lorne Beck officiating. Visitation will be held from 5:00 p.m. until 7:00 p.m., Sunday, October 3, 2021 at Shipman’s Funeral Home. To leave his family a message, please visit his Tribute Wall at www.shipmansfuneralhome.com.  Arrangements are under the direction of Shipman’s Funeral & Cremation Service.

To order memorial trees or send flowers to the family in memory of William Thompson, please visit our flower store.