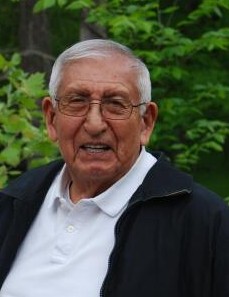 Caroline (Smith) Wickliffe. A cowboy at heart, golf enthusiast and family man, he parted this life

Cherokee was his first language. He graduated from Pryor High School in 1955. Bill joined the

Washington, and Korea where he was a tank mechanic. On May 19, 1962 in Miami, Oklahoma,

Bill and Mary Lue McGraw were united in marriage. The couple was married for more than 58

years. Together, they were members of Life Fellowship Church in Pryor.

For 31 years Bill worked as a service technician for Sears, Roebuck and Co. He was a member of

Grand Master for Oklahoma, Bill had the honor of laying a wreath in 2016 at the Tomb of the

Unknown Soldier at Arlington National Cemetery in Virginia. For many years Bill coached his

girls’ softball teams, and his team was the only team in the league that played on the old OKC

rodeos, playing golf, traveling and telling stories of growing up in Kenwood.

Renfroe. Visitation will be held from 6 to 8 p.m., Thursday, Feb. 18 at Shipman’s Funeral Home.

Kast. He is survived by his wife Mary Lue of the home, two daughters, Stephanie Wickliffe and

To leave a message for Bill’s family, please visit his Tribute Wall at

wwww.shipmansfuneralhome.com. Arrangements are under the direction of Shipman’s Funeral

and Cremation Service. In lieu of flowers, Mary Lue has requested memorial donations for

To order memorial trees or send flowers to the family in memory of William "Bill" Wickliffe, Jr., please visit our flower store.