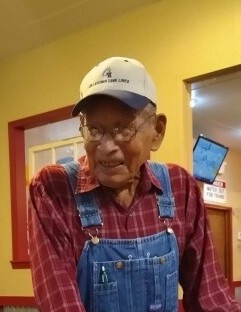 Woodward “Woody” Hair, 91, of Salina, passed away on Thursday, August 6, 2020 in Tulsa. Woody was born on April 29, 1929 in the Wickliffe area; the son of Nicholas and Molly (Scuggins) Hair. He worked many jobs throughout his lifetime, but worked for Muskogee Bridge as an Iron Worker for the longest period. Born and raised in the Cherokee Nation, Woody Hair exemplifies all that it means to be Cherokee. A first language speaker and traditional hog fry chef, gatherings at Woody’s place hold a special place in Cherokee culture. Woody had a passion for baseball, he often told the story about when Micky Mantle got his first home run off him when they played opposite teams in the Spavinaw area; but his favorite team to watch was the New York Yankees. He was a man of faith, and faithfully attended Steeley Baptist Church in Kenwood for many years. Woody married Brenda Scott on July 4, 1996 at PNR Park in Kenwood and they have celebrated 24 years together. They continued having hog fries and family gatherings on their anniversary in that same spot almost every year. He loved to meet new people, he never met a stranger and enjoyed having conversations with those he loved most. He continued sharing stories about his life, speaking in Cherokee and in English to all those who were there to listen. He leaves behind a great legacy for his family and friends to cherish.

To go along with his favorite pastime, Woody’s services will be held at the Kenwood Ballpark on Kenwood Road on Tuesday, August 11, 2020 at 11:00 a.m. with Reverend Richard “Guy” Soldier officiating. Burial will follow in the Euwasha Cemetery with Curtis Dry, Frankie Black, Aaron Hopton, Brad Cooper, Adrian Black, and Tony Hopton serving as casket bearers.  Honorary casket bearers will be Reverend Richard Budder, Richard Wolf, Earl Chancellor, Bud Squirrel, Alvin King, Gary Benge, Randy Ross, and Leroy Leaf. Visitation will be held from 6:00 p.m. until 8:00 p.m., Monday, August 10, 2020 in the Shipman’s Funeral Home Chapel. To leave his family a message, please visit his Tribute Wall at www.shipmansfuneralhome.com. Arrangements are under the direction of Shipman’s Funeral & Cremation Service.

To order memorial trees or send flowers to the family in memory of Woodward "Woody" Hair, please visit our flower store.